CIBC – Flight To Safety In Tech; What Names Work Best?

On MONDAY AUGUST 24th after the 768.5 point hit to the TSX, we decided to take a look at which of our technology names under coverage were most attractive to hold in these erratic markets. Despite the bounce back later in the week, the TSX remains down roughly 5% for the month of August and the NASDAQ down 6%.

The metric we used to determine the names most ready for a quick bounceback was free cash flow yield, defined as the current year’s free cash flow divided by its enterprise value or FCF/EV. If these yields are indeed correct, investors will want to hold those companies with higher yields due to their superior cash generation, despite these volatile markets. We expect the superior yields will ultimately help to stabilize and then move the company’s respective stock prices higher. We decided to look at the yields for both our forecasts and consensus street expectations and compare the two.

Our takeaway from this exercise was Vecima, Celestica and Kinaxis scored best. This is certainly consistent with our views on these three companies. We were also pleased to see that Mitel, Redknee and Sierra Wireless are also looking good for 2016. We recommend that our readers use this quick exercise as a screen to help them focus on the right opportunities in these volatile markets. See below for the results. 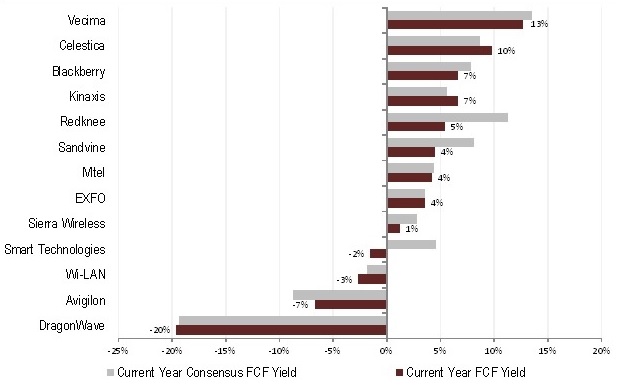 With a 13% yield on 2015 free cash flow, Vecima leads the pack. We believe the stock still has room to move higher with an anticipated 15% free cash flow yield in fiscal 2016 at current EV levels.

Celestica is currently sitting at a 10% free cash flow yield. At current EV levels, we forecast 14% FCF yields in 2016 and believe it provides good support for the current price.

After an outstanding Q2, we expect Kinaxis to see a 6.6% FCF yield in 2015, driven by a bump in deferred revenue from a large long-term contract win. While we forecast this to come down 3.6% in 2016, this yield would still be above the likes of salesforce.com (3.1%), ServiceNow (2.5%) and Workday (0.6%). Remember its growth rate has just started to pick up. We expect this trend will continue to positively impact the company’s stock price. Cloud investors should recall that salesforce.com has been benefiting from 50% annual growth for over 10 years.

Redknee – After a disappointing 2015 year-to-date, we expect a rebound from FCF yield of about 5% in 2015 to 12% in 2016. The improved operating leverage next year should help move the stock higher.

Sandvine – We do not expect the company’s free cash flow yield of 4% to expand significantly in fiscal 2016 due to rising operating expenses to support its growth plan. Therefore we remain neutral on the stock.

EXFO – The company’s FCF yield is 3.5% after its run up in price on Thursday. While we expect this to trend higher with restructuring, there are enough question marks on the top line where we believe there are other stocks that could make more sense in the current market.

Sierra Wireless – Despite tracking to 15%+ revenue growth in 2015, its free cash flow yield is less than 1%, driven by negative impacts in net working capital. This compares to FCF yields of 4.6% in 2014 and a forecasted 10% yield in 2016 due to improved operating leverage.

It should be noted that Avigilon’s negative -7% FCF is mostly a result of a $40 million payment that will be made later this year for the purchase of its new downtown Vancouver head office along with a $18 million patent purchase earlier this year. Excluding these transactions its free cash flow yield for the year would be 2%, moving to 12% next year.


Back to all Press Releases

We use cookies on our website to give you the most relevant experience by remembering your preferences and repeat visits. By clicking “Accept All”, you consent to the use of ALL the cookies. However, you may visit "Cookie Settings" to provide a controlled consent.
Cookie SettingsAccept All
Manage consent

This website uses cookies to improve your experience while you navigate through the website. Out of these, the cookies that are categorized as necessary are stored on your browser as they are essential for the working of basic functionalities of the website. We also use third-party cookies that help us analyze and understand how you use this website. These cookies will be stored in your browser only with your consent. You also have the option to opt-out of these cookies. But opting out of some of these cookies may affect your browsing experience.
Necessary Always Enabled
Necessary cookies are absolutely essential for the website to function properly. These cookies ensure basic functionalities and security features of the website, anonymously.
Functional
Functional cookies help to perform certain functionalities like sharing the content of the website on social media platforms, collect feedbacks, and other third-party features.
Performance
Performance cookies are used to understand and analyze the key performance indexes of the website which helps in delivering a better user experience for the visitors.
Analytics
Analytical cookies are used to understand how visitors interact with the website. These cookies help provide information on metrics the number of visitors, bounce rate, traffic source, etc.
Advertisement
Advertisement cookies are used to provide visitors with relevant ads and marketing campaigns. These cookies track visitors across websites and collect information to provide customized ads.
Others
Other uncategorized cookies are those that are being analyzed and have not been classified into a category as yet.
SAVE & ACCEPT